skip to main | skip to sidebar

I have a few pet peeves.  One is when people chew with their mouth open.  Another is when people assume that kids can’t make a difference (except to sully an otherwise clean room).  While we, as adults, have lots of power (we do all of the driving and buying, at least for now), it’s best not to overlook the influence that children can have on the world.  For this reason, I wanted to focus my Blog Action Day post on what kids can do in the kitchen to prevent climate change.  It’s their future – it’s time we let them have some power.
Talk to your kids about climate change and how “going green” can help.  The EPA has a fantastic page, written in kid-lingo that explains “the big deal” about climate change.  Your children will probably surprise you – they might know more about the suggestions below than you do.  Regardless, with a little encouragement, they can help you stay on track, and can learn to take actions that will make a positive impact on our planet.
Kids can…
Encourage you to eat out less and help to prepare meals at home.
Ditch the Disposables
Food Shopping:
Miscellaneous Ideas for the Kitchen: 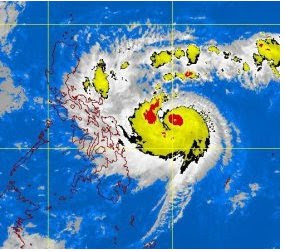 Still steeped in the flood waters brought by Typhoon Ondoy, the Philippines now has to brace itself for Typhoon Pepeng which is due to make landfall on Saturday afternoon.

With hundreds of thousands still suffering from the flooding caused by Typhoon Ondoy, relief and rescue operations have to be sped up before the next Typhoon unleashes another wave of destruction.  Otherwise, Typhoon Pepeng's rampage could very well increase the number of disaster victims and further intensify the suffering of people already left homeless by Ondoy.

Flood waters have not yet receded in some parts of Metro Manila and provinces just outside its boundaries, the arrival of Typhoon Pepeng could dump more rain water thereby causing flood waters to rise again.

This early warning about Pepeng's arrival should get the government moving but more importantly, it should get every Filipino preparing for what may be an even more destructive typhoon.

If the government must forcibly evacuate people in low-lying areas and areas prone to landslides, it must do so TOMORROW.  It cannot waste time.

I'd even go so far as declaring a suspension of certain rights in order for government to move more efficiently in taking people out of harm's way.

Anyway, here is a report from abs-cbnnews on Pag-ASA's  analysis of the coming typhoon:

"There is a big possibility that it will become a supertyphoon. This is a very strong storm, packing winds of 175 kilometers per hour and gusts of up to 210 kph. Most likely it will make landfall in the afternoon of Saturday. That is when it is most critical," Nathaniel Cruz, PAGASA director for operations, said in a press briefing.

"In terms of wind intensity, Ondoy was only half of the strength of Pepeng. When it made landfall, Ondoy only had winds of 85 kph while Pepeng is 175 kph. However, we cannot really compare the two because it was the rain that was really destructive about Ondoy," he said.

He added: "Our major concern with Pepeng is the disastrous winds - 175 kph to 210 kph. We expect typhoon Pepeng to intensify further as it moves towards northern Luzon."

He said the weather bureau will give a forecast on the typhoon's estimated rainfall intensity before it makes landfall.

As of 10 a.m., the new typhoon was sighted 520 km east of Borongan, Eastern Samar and is moving 24 kilometers per hour in the general direction of Northern Luzon and the Taiwan area.

Cruz said the typhoon is forecast to make landfall over Aurora-Isabela by Saturday morning. It said the typhoon will bring occasional rains over the eastern section of Luzon and Visayas and more frequent rains in Samar and Bicol Thursday afternoon.

Roselie
Simple yet having interest on the lastest news in our globe.